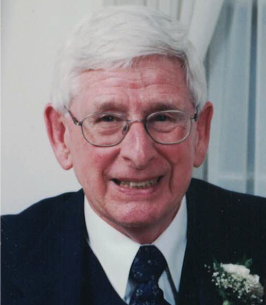 WILLIAM JAMES IRWIN
December 11, 1935 - May 22, 2021
Bill Irwin passed peacefully at home, surrounded by loved ones, after a long battle with cancer.
He will be greatly missed by his loving wife of 63 years, Dorothy; his daughter Laurel (Tim
O’Connor) and his sons David (Clare) and Daryl (Thamazine); his cherished grandchildren, Erin
(Matt), Brendan (Stephanie), Zachary, Kathryn, Zoe and Emma; and his six great-grandchildren.
Survived by his sister-in-law Valerie and brother-in-law Al Crosbie (Leah); and his many nieces
and nephews. Predeceased by his parents Clarance and Eleanor, brother Jack; brother-in-law
Don Crosbie and sister-in-law Barb.
Bill lived his whole life in St. Catharines. He graduated from Thorold High School and began
his teaching career at the age of 20. Bill attended McMaster University for one year, summer
school and night school while teaching. He graduated in 1961. After teaching elementary
school for six years, he became a High School History teacher. An avid sports fan, Bill
coached football and basketball at the high school level. Partway through his teaching career,
Bill got his Masters of Education at Western and became a Principal. He retired from education
after 36 years in 1992.
Bill began his second career upon retirement as a consultant. He spent several years on the
business education council, a partnership between business, education and government. His
position took him to Ottawa several times and a trip to Japan to observe how business and
education interacted. Bill continued his consulting business for 20 years helping workers get
back into the workforce after their company downsized.
Bill was an active volunteer in many organizations including Kiwanis, First Grantham United
Church, and with the Ina Grafton bungalow community. Of his 49 years in Kiwanis, Bill held
many board positions, including Lieutenant Governor. He was involved with many, many
projects too numerous to name, as a Kiwanian.
He enjoyed cottaging every summer with family and friends heading to Brigadoon cottages
and Ennismore Inn before buying their cottage in Elk Lake in 1980. Bill and Dorothy spent
most summers up north and had many extended family gatherings over the years.
Bill and Dorothy enjoyed attending their local Junior hockey team games over many years. Bill
was an avid fan of his grandchildren and great-grandchildren’s concerts, sports games and
recitals. He was the kind of person who never said no to anyone or anything and was always
there to help when you needed whether it was advice, a listening ear or volunteering.
He will be deeply missed by many. Cremation has taken place and a Celebration of Life will be
arranged at a later date. Arrangements entrusted to Passfield Mortuary Services Inc.
Donations in Bill’s memory may be made to First Grantham United Church or to the Walker
Centre.