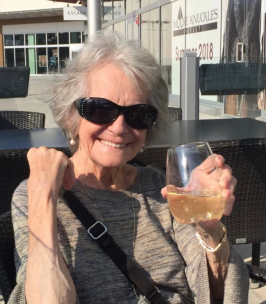 At the St. Catharines General Hospital during the early hours of Sunday, August 1st, 2021, Mrs. Shirley Linklater (nee Fisher) of St. Catharines, formerly of Atwood and Dunchurch, passed away peacefully, with her loving sons at her side. She was in her 86th year of life.

Shirley was the cherished mother of Bradley (Debbie) Linklater of St. Catharines and Brent (Dawn) Linklater of Niagara-on-the-Lake. Adored Nan of Brett (Jackie), Holly (Mike) Fisher, Brock, Owen and Lexi Linklater. Great-grandmother to Brody, Riley and Ellie. Beloved sister of Audrey and Mario Morettin of Sault Ste. Marie, and Marguerite and Dave Litwiller of Galt. Dear sister-in-law to Randy (Carol) Linklater of Sault Ste. Marie. Shirley also had many nieces and nephews. Shirley was predeceased by her husband Richard and her parents Harvey and Frances Fisher, as well as her parents-in-law Richard and Adeline (MacDonald) Linklater.

Shirley spent her early years growing up in rural Linwood, Ontario with her parents and her two sisters, Audrey and Marguerite. She would tell stories of hitching rides in the buggy with the milkman, and sneaking off the store to buy Coke when she was supposed to be taking Polish lessons!

She moved with her family to Kitchener in the mid 1940’s. In her early 20’s, Shirley moved to Sault Ste. Marie to live with her sister, where she met, and fell in love with her husband Richard. They owned a home for roomers and boarders and Shirley would prepare their breakfasts and lunches. If there were any complaints about her food offerings, this spunky lady would have no problem telling them she was finished making any more food for them, as she was “no short-order cook!”

Shirley’s two sons, Brad and Brent, were born in Sault Ste. Marie, and then in the mid-1960’s Shirley moved to St. Catharines with Richard, where she made many great friends, along with a great many good memories. During these years, she kept herself busy working at a variety of jobs, while also being a fantastic wife and mother. These were busy years for Shirley but she still made time to enjoy a rum and coke around the pool and make memories with her family. Shirley loved to travel, and during these years she had memorable trips with Richard to Hawaii and Europe, as well as Florida with Richard and her boys.

In the early 1990’s Shirley moved to Dunchurch with Richard to enjoy cottage life on Whitestone Lake. She spent her days gardening, feeding the birds, baking, knitting and crafting assorted items while waiting for her sons and their families to visit so that she could spoil and spend time with them. She also made lots of friends during this season of her life, no doubt due to her easygoing, fun-loving personality and positive attitude. During these years, Shirley spent many winters in Destin, Florida where she and Richard loved to soak up the sun, spend time with her Florida friends, and watch the sunset with a cocktail or two before cooking up some seafood which she absolutely loved!

After Richard’s sudden passing in 2004, Shirley moved to Atwood where she began a new chapter of her life. She made new friends and became more independent. She enjoyed meeting and getting to know her new neighbours, walking the neighbourhoods with her new friends and delighted in spending time with her family, especially her young grandchildren. She thoroughly enjoyed driving to her sister’s cottage to spend time with both of her sisters, who meant so much to her. They would go to the market and play cards together. Sunday afternoons were always a favourite time for her when she could treat her family to a homemade Sunday dinner.

Shirley was a gifted cook who made many mouths water for her delicious meals, usually followed by a fabulous dessert. She was well-known in the family for her knack for making italian cuisine, but by far one of her favourites to treat the family to was her famous Graham Wafer Pie!

In 2018, Shirley moved back to St. Catharines so her time could be shared with more family members. She was treated to many winery visits and made amazing memories with family. She got to meet 3 new great-grandchildren in the last couple of years!

Shirley radiated kindness, acceptance, positivity and love. She did not complain, and was always quick to laugh. She loved life. She absolutely loved spending time with her family and friends, Elvis music or country music and was always humming a tune or singing a song while she puttered around. She was an amazing, elegant and classy lady whose memory will live on in everyone who knew her.

Cremation has taken place, and a private Celebration of Shirley’s Life will be held on August 21st in St. Catharines.