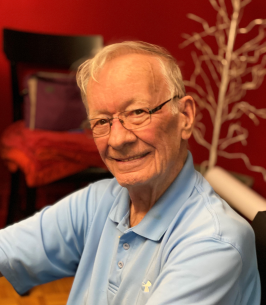 With great sadness, we announce the passing of our father, Robert (Bob, Bobby) Archibald McEwen, at the age of 83 years in his home in St. Catharines, Ontario on May 30, 2021.

He leaves behind his daughter, Carolyn (Ali) and grandchildren Alia and Zain, and his son, Cameron (Camellia) and grandchildren Ciara and Caeleigh. He is predeceased by his wife, Joan, brother, Donald, and parents George Archibald Alexander McEwen and Myrtle Anne (Ames) McEwen.

Dad will be greatly missed by his family in Saskatchewan, his brother, Russell (Dianne) and nephew David (Lorrain), and nieces Lori (James) and Denise and his aunt Marjorie in Sault Ste. Marie.

Born in Geraldton, ON, dad was a fabulous hockey player as a young man (could have turned pro), played curling competitively with our mother, loved fishing and all that the North had to offer. He worked as an electrician for the mines and spent most of his adult working career with Northern Telephone in Managment - being the first one to bring a computer in to the telephone company. His favourite job was working with fibre optics in the Air Force. He took his training on the CF100, T33, F86 and F104 and operated all the radio and radar for these jets. While in the Airforce, he was part of the Queen’s Guard of Honour when Queen Elizabeth II visited and they were recognized as being the best in the armed forces for her. He was a Mason (Past Master of Aurum Lodge 704 and a Member of Northern Lights Chapter of Royal Arch Masonry) and then a Shriner, and was also a member of the Knights of Templar. He loved his sports (Toronto Maple Leafs, Winnipeg Jets, St. Louis Cardinals, and Baltimore Ravens), Bud Light, cooking/baking, space science, and spending time with his kids and grandkids playing board games.

His favourite vacations were a family Disney Transatlantic Cruise and a Disney Cruise to Hawaii where he visited the Pearl Harbour Monument. The best gift he ever received was at the age of 4 or 5 - a six seater toboggan from Santa Claus to replace the cardboard boxes he and his brother, Russell, used before that.

Cremation has taken place. His final resting spot will be Lake Superior as he had many fond memories of spending summers as a youngster in the area of Rossport, on Bowman’s Island.

Those who wish to remember him can play Frank Sinatra’s “I Did It My Way” (his theme song). Donations in Memoriam can be made to the Shriners Hospitals for Children.