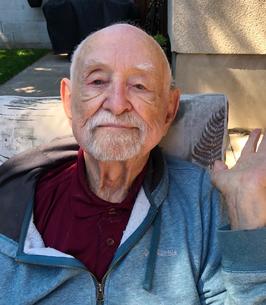 With heavy hearts we announce the passing of Richard Slade, on Friday, January 21st, 2022, in his 91st year. Dick was loving husband to Shirley, and supportive father to Debbie (John), Laurie (late Bill), Tim (Janice), and Katie (Brock). He was beloved grandpa to Adam (Tiffany), Alex (Suzanne), Emily (Paul), Rachel (Scott), Elise (Ralph), Annie, Ian, Allie and Jack. Dick was cherished Great Grandpa to Josh, Ben, Bridget, Colleen and his birthday buddy, Kennedy.
Born in Toronto and raised in St. Catharines, Dick worked at Ferranti Packard Transformers, retiring “early” after just 42 years, starting as a mail clerk and finishing as a managing accountant. The duration of this extended engagement was far surpassed by his nearly 69 years of loving marriage to Shirley.
Dick celebrated his faith at St. Andrew’s United Church in Port Dalhousie and later at Silver Spire United Church downtown, singing in the choir at both locations. He shared his love of singing with the community, first with the St. Catharines Men of Song and then with the Chapel Singers, The Chapel Four, Praise Singers, Sunshine Singers and Curtains Up.
Summers were spent camping with family and golfing with friends, and winters found him rooting for his beloved Jr. B Falcons, first alongside his dear friend John and later with his sidekick Duke, the snack ladies, and occasionally his wife. Bumbling referees could count on an earful from the same set of seats nearly every Friday night for over 40 years, beginning in the early 70’s and continuing well into the last decade. They might not miss him, but the rest of us will.
Dick joins those who have gone on ahead: father Ralph, mother Annie, daughter Sharon, brother Max and his wife Margaret, sister Joan and her husband Wolfgang and a multitude of special friends. As per Dick’s wishes, cremation has taken place. Arrangements entrusted to PASSFIELD MORTUARY SERVICES INC. (905) 682 0474.
“Rest easy, Sir Richard; we are looking after Mom.”
A private family service will be held at a later date.
If desired, donations can be made directly to the Walker Family Cancer Centre or to the T. Roy Adams Regional Centre for Dementia Care.