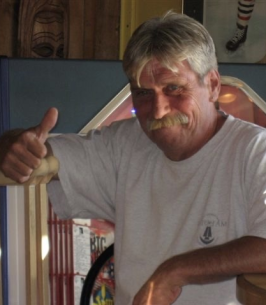 With much love and family by his side, John passed peacefully at St. Catharines Hospital May 28, 2021 at the age of 69. John will be forever loved and cherished by his partner and Soulmate Colleen Beard, his children Bryony (Christopher), Weston (Richelle), Chelsea (Giancarlo), Mackenzie, dear friend Paola Pollard, his brother Bryan (Kerry) Sydney, Australia; his beloved grandchildren, Jack, Henry and Camila, and canine pal Milly. Predeceased by his parents, William and Jeanne, and canine pal Molly.

Pud lived life large and touched the hearts of so many with his sincere kindness and generosity. Born in Stratford and raised in St. Catharines, he graduated from Laura Secord Secondary School where he was a track star, played clarinet, and developed a brain bank of trivial knowledge that was envied or considered useless. Pud was also a Mason and member of the Grand Lodge.

He ran the family business, Skyway Fertilizer in Smithville. Pud will be remembered by his many friends in Port Dalhousie where he co-owned Scorecard Harry’s several years ago and often seen. Some will remember his Superbowl parties where his garage was converted into a seating stadium to cheer on the Bills. But he was more so a devoted CUBS fan. Current owner of Puddy’s Bar & Grill was his hobby, his love, his rec room, with the sole purpose to bring people together and enjoy what he liked most, socializing with friends, and supporting Niagara’s bands. Often outfitted in a flowered shirt, he entertained us with his Opa plate smashing; his rendition of “I did it my way”; and loved to feed the gang with Football Day turkey dinners and St. Patty’s Day corned beef. His annual golf tournaments favoured the children’s charities. His mutual respect and love for his staff will keep the tradition alive.

He was extremely proud of his children and their successes, noting Mackenzie pursuing a degree at Brock University and Weston graduating from law school and receiving his call to the bar. He was a wonderful Papa. It was his pride and joy to watch his grandsons play sports, Jack’s hockey and soccer games; and often travelled to Burlington to catch Henry’s baseball games. He bought Camila her first tool set and spent hours building and taking apart wooden pieces while watching Sing. He was very proud that she knew a hammer from a screwdriver, and a screw from a nail at two years old. These memories will be cherished by them forever.

Pud was a man of few words, but his heart spoke volumes. His love of many music genres, especially the Blues, became infectious to everyone who spent time with him especially on trips to New Orleans (some 20 odd times). He was looking forward to a trip to the UK with Colleen, Bryan and Kerry to tour the canals and Scotland castles. He was a terrific dancer, and he was honoured to share a special dance with his daughters on their wedding days – where he certainly outdanced them. He was a fan of Star Trek, Lord of the Rings and Star Wars, never missing opening day in the theatres with his sons.

Precious to him was his saw, his drill, and a plank of cedar! His love of woodworking is evident at Puddy’s and the many decks, tables, and hutches he built for friends.

He has left a legacy of love and friendships and will live on in our hearts forever. Pud’s favourite adage of William Wallace… “EVERY MAN DIES. NOT EVERY MAN REALLY LIVES.”

To celebrate John’s life, a musical event will be held at a time when we can gather and share the stories.

Plant a tree in memory of Pud.