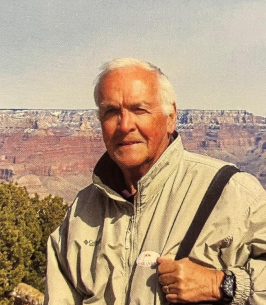 John Michael Boon died peacefully yesterday surrounded by his family at the age of 82. Husband to his beautiful wife Jeanette, Father to Fiona (Dan), John (Shelley), and Andrew (Vicki). Grandfather to Evelyn, Ella, Sadie, Ian, Gavin, and Sam. Neighbour to Tim.
As Monty Python once said, he has kicked the bucket, He’s passed on! He has ceased to be! He’s expired and gone to meet his maker! Bereft of life, he rests in peace…
But what a life.what a legend…
Born an Evertonian in 1939 in the city of Liverpool, John’s birth was rumoured to have been the reason for the second world war. Truly though, his life was spent providing joy, kindness and laughter to others. John had a passion for education and helping others. After receiving his teaching certification, he took a much larger version of that Ferry across the Mersey and landed in Canada. He met a smart, beautiful and no-nonsense Scot named Jeannette and they have been married since 1967. John and Jeanette adored and loved each other deeply. They lay claim to being Welland’s greatest power couple.

After working in Toronto as a teacher, the Niagara Region beckoned and he graced Welland with his presence for the last 48 years. John worked with the Lincoln County Board of Education as a classroom teacher, special education teacher, and special education consultant. His commitment and dedication to his students had a lasting impact that is felt to this day. Once retired, “Grandad” enjoyed his time with 6 incredible grandchildren and was certainly the greatest entertainer for all of them.

If you knew John, you knew he was the life of the party. His laugh was contagious and his sense of humour was almost impossible to match. He maintained that humour in spite of his illness. During a difficult conversation about funeral homes and visitations, John was asked about open or closed casket. He replied simply that he would like to be sitting up. “I want to make it as uncomfortable as possible for everyone” he would joke.

John loved playing the guitar and if you were lucky to hear him sing House of the Rising Sun, you understand you were witnessing an epic moment.

John loved his football and that meant really only one word…Everton. Their club motto Nil Satis Nisi Optimum ("Nothing but the best is good enough") is a Latin phrase that exemplifies how John approached treating and helping others.

John took his love of football and coached within the Welland Soccer Club for many years. He might be the only coach to teach and execute the offside trap to 9 year olds…such was his joy of the game.

John was a faith filled husband, father, and grandfather who loved, and was deeply loved. His life will continue to serve as an example to us all.

Following his wishes, a celebration of life will be held on Sunday, July 10th between 1:00-4:30 pm at the Welland Arena community room. We Invite you to drop by at any time wearing blue to honour John. He will be greatly missed, but our tears will turn to laughter when we think of John and his legacy of kindness, laughter, and humour.
The entire Boon family would like thank the doctors and nurses at both the St. Catharines General Hospital and the Welland Hospital.
Donations to the Hope Centre in his name are greatly appreciated
https://thehopecentre.net/give-hope/#donate