Obituary for Esther May Campion (Helser) 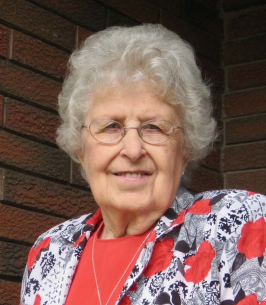 Esther May (Helser) Campion entered Heaven’s gates on May 31, 2022 at the age of 97. She joins her husband of 72 years, Dr. George Campion, who passed away five months earlier on December 30, 2021. Esther leaves behind her four children and their spouses, Don (Sueanne), Marjorie, Barb (Keith), and Betsie (Dave), nine grandchildren and nine great-grandchildren.
Esther was born on February 7, 1925 in Garkida, Nigeria, to SIM missionaries Dr. (PhD) Albert and Mrs. Lola Helser, former SIM General Director (1958-1962). Esther knew from an early age that she wanted to be a nurse and serve in Africa. After graduating from Wheaton College, IL in 1946, she pursued a nursing degree at Toronto General School for Nurses in Ontario, Canada. In April of that same year, she became engaged to Dr. George Campion. They married in 1949, and travelled to London, England where Esther took courses in midwifery and x-ray, while George took surgical training and tropical medicine in preparation to serve under SIM as medical missionaries. In 1951, at the age of 27, they arrived in Nigeria after 3 weeks travel on an ocean freighter, where they began the work of building the Egbe Hospital medical complex.
Esther was an active partner throughout their 36 years of medical ministry, supporting her husband who was often the only doctor and surgeon on staff. She worked in the hospital pharmacy, provided administrative and secretarial work as the hospital grew, communicated with ministry supporters, trained, and mentored many national co-workers, provided hospitality for visitors and sick missionaries, and cared for their four children.
One of her joys was seeing the hospital, nurses and midwifery training school being built in the early years and then seeing the graduating nurses do well. It also brought her much joy to see thousands of patients cured at the hospital as they heard the Gospel often for the first time. Esther loved working with a wonderful team of missionaries and Nigerians, many who became personal friends whom she continued to communicate with throughout her life. She was honored with the title Chief (Mrs.) Esther Campion, The Yeye Oloriawo of Egbeland.
Esther and George returned to Canada in 1986 where Esther administratively supported George’s continued medical practice in St. Catharines, ON, Canada until his retirement in 2012.
As the matriarch of the Campion family, Esther is remembered fondly by her children and grandchildren for her brilliant mind and her gifted ability to ‘connect the dots’. Always interested in every detail, Esther was keen to have updates and would pray for Egbe Hospital and the School of Nursing and for all the events in each family member’s life - committing her children and grandchildren to the Lord daily. Her quiet competence, steadiness, consistency, and perseverance were lived with dignity and poise. Her faith in God was steadfast and marked a life of sacrifice and service. Her meaningful influence was evident by the life and example she led and by the number of people she touched and loved. Her life of service will echo into eternity. Most importantly, she will be remembered by family as mom and grandma.
A Celebration of Life service will be held on July 23, 2022, at 11:00AM at Calvary Church, 89 Scott St, St. Catharines, Ontario, Canada, followed by a luncheon.
Register for the luncheon at: https://calvarychurchonline.churchcenter.com/registrations/events/1345170
View live stream of service at: https://youtube.com/channel/UC68-Ak5tBZp-FWfQp5Sw-aw
Donations to Egbe Hospital in honor of Esther’s medical mission service in Nigeria, would be appreciated by the family. https://egbehospital.org/donate-to-egbe-hospital/