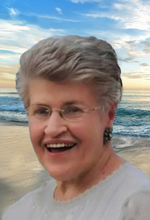 Dorothy was born on April 2, 1925, in Elderslie Township, Bruce County and moved to St. Catharines as a young girl. Dorothy married Vince on May 29, 1946. They shared 55 years together before Vince’s passing on September 26, 2001.

Dorothy’s large family was central to her life. The Campbell Clan grew and raised their families together. Many of them vacationed together in Port Elgin and in the islands with the Caribbean Club. They supported each other throughout all of life’s trials, tribulations and celebrations. Dorothy looked forward to the weekly Sunday Roast Beef dinners with her children and grandchildren.

Dorothy was very active in the St. Paul Street United Church (now Silver Spire) community and for many years baked with her sisters for the annual bake sale. Regulars returned yearly to buy their famous meat pies, butter tarts, and chili.
A special thank you to the staff at Linhaven, for their care and compassion over the last few years.
As per Dorothy’s wishes, cremation has taken place. Arrangements entrusted to PASSFIELD MORTUARY SERVICES INC. (905) 682 0474. A funeral service will take place at Silver Spire United Church, 366 St. Paul Street, St. Catharines on Saturday, January 29th at 2 pm. Mask wearing is mandatory.
If so desired, donations made to the Alzheimer Society in Dorothy's memory would be greatly appreciated by her family.