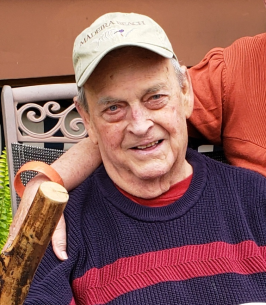 Our world has lost a great husband, father, papa, great-grandfather and brother-in-law. It is with immense, heartfelt sadness that we announce the sudden, peaceful passing of Don. Born in Fenwick, and preceded in death by his parents Harlem (Bill) and Laurine and sister Anne, he met the love of his life, Rosemary (Moore) while in high school and married on September 30th, 1961. Don worked many odd jobs before pursuing a career in auto repair. Don and Rosemary moved to St.
Catharines, where they welcomed the arrival of their three beloved children Marla, Darren (Linda) and Steven (Kerri). Don continued in the auto repair field until his retirement and then focused on being "Papa"
to grandchildren Andrew, Christopher, Jillian, Shannon, Trevor, Carson, and Briar, as well as great- grandpa to Charlotte, Gracie, and Maren.
Don and Rosemary spent most summers at the cottage on Big Gull Lake, where he knew everyone and loved to sit and chat with anyone who had a few spare minutes. He was always in demand with his ability to fix anything and proudly wore his T-shirt that read, "If Papa can't fix it, nobody can." He later developed a passion for woodworking and with Rosemary's supervision, they created many beautiful pieces that hold wonderful memories for those that were lucky enough to receive them.
Don valued his relationship with Rosemary's family, including the late Lawrence (Gail), Charlotte (Gordon), Shirley (Len), and David. Don was grateful to have lived a wonderful life which was shared with friends and family, and we will cherish our memories of his kindness, love, support and sense of humour. In accordance with Don's wishes, cremation has taken place.