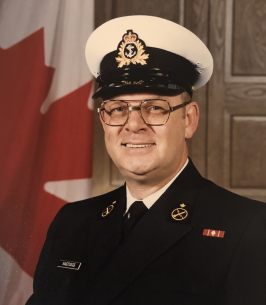 HASTINGS, David Thomas Robert
Passed away peacefully on December 6th, 2021 at Niagara Health, St. Catharines site at the age of 81. Mr. Hastings, a life-long bachelor is survived by his sister-in-law, Georgina (Tiny) Hastings, his nephew Douglas Hastings of St. Catharines, Ontario and his nephew Dr. David Hastings (Kimberly) from London, Ontario; his brother-in-law Charles Marino of Chicago, Illinois as well as his nephew, John Marino of Chicago, Illinois. He leaves his great niece, Diana Hastings of St. Catharines and four great nephews, Dillon Hastings of St. Catharines, Derrick, Tyler and Carter Hastings of London, Ontario. David was pre-deceased by his brother Donald (2013) and his niece Donna-Jane Hastings (2007).
Mr. Hastings was born in Dunnville, Ontario on October 9th, 1940 and was raised in Dunnville and St. Catharines. He enlisted in the Royal Canadian Navy in September of 1958 and served for thirty -six years in the Canadian Armed Forces. He retired from active service with the Canadian Forces as a Chief Petty Officer First Class in March of 1994 and enjoyed retirement in St. Catharines from the date of his release. As per his wishes, cremation has taken place. Arrangements entrusted to PASSFIELD MORTUARY SERVICES INC. (905) 682-0474. Private services to be held at a later date. In lieu of flowers and if desired, donations to the “Niagara Health Centre Building Fund” would be appreciated by his family.